I once heard Jerry Clower, “The Mouth of Mississippi”, a Southern comedic philosopher of sorts, described visiting kinfolk who lived back in the ‘sticks.’  He was a city boy from Liberty, Mississippi, population seven hundred or so.  He described a trek down a ‘holler’ split by a creek into a heavily wooded area on a narrow footpath.  Miles and miles he went,  hopping over stumps and climbing up banks with only animal calls, bird twitters, and the babble of the creek to accompany him before finally arriving at a rustic, moss-covered cabin.  As he stepped onto the low front porch, he saw a piece of paper thumbtacked to the front door.  It was a single, scrawled sentence, “Gone to get away from it all, be back soon.”

Once upon a time country folk had already gotten away from it all and didn’t need to trek far.  They might go hunting in the woods, picking blackberries or fishing on a riverbank.  The weekly trip to the general store was a big deal.  They were in the middle of their getaway…or the middle of nowhere.  I guess those times have changed for some folk.

One of the small waterfalls around our ‘little piece of heaven’

When my bride and I moved to 3300 Highway 11, the scenic Cherokee-Foothills Highway, we were in the sticks.  On land that was described as gently rolling, I learned real estate agents lie.  Thirty years or so later, you’d still think we lived in the sticks if it just wasn’t for the traffic and the golf courses.  Like Daniel Boone, I feel civilization squeezing in.

The land around us is covered in hemlocks, black walnuts, and a mostly hardwood forest.  Mountain laurel and rhododendron, wild iris, blueberries, and wild azaleas are abundant. Tall hillsides form the basin our hundred and twenty-year-old farmhouse sits in. Cut by ravines, ‘hollers’, and seven year-round streams “my little piece of heaven” is the perfect place to “get away from it all.”

Mountain Laurel will soon be joined by Rhododendron 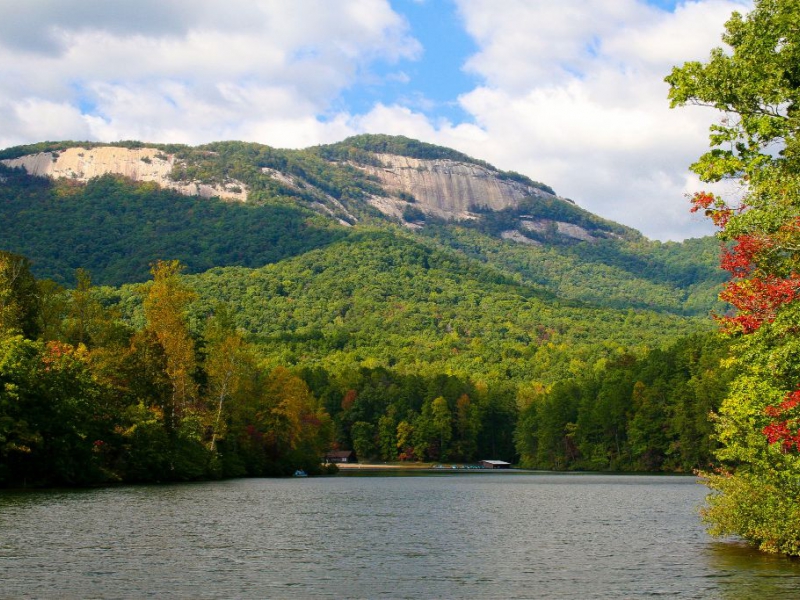 Table Rock from across the lake

And golf courses…I forgot…golf courses.  The path has become too well-traveled.  Transfer trucks, Harley Davidsons, and big tricked out pick-up trucks with glass packs pulling bass boats have been joined by BMWs and Mercedes with golf bags nestled in the trunk or bike racks on the deck lid.  It makes me want to get “further away from it all.”

The self-quarantine due to the Corona-19 has not stopped the traffic noise but it certainly has made me ponder the wildlife preserve my wife and I have created.   You might want to read in “too lazy to cut anything other than pathways between the wild strawberries, honeysuckle, and blooming clover”…and the ferns…the ferns that are taking over.  The problem is my bride.  She doesn’t want anything cut that “might” put off a brief flush of color no matter how small the bloom or how fast it disappears.  Still, it is one of the reasons I try not to venture out where people are…that, and I don’t want to die on a ventilator.

Retirement has made being stuck at the homeplace easier, or is it just being lazy? We’ve spent hours watching playful chipmunks, newly born, playing under the bird feeders.  They mingle with the mourning doves, robins, and sparrows on the ground while purple and goldfinches, cardinals, grosbeaks, nuthatches, tanagers, and woodpeckers jockey for position to eat black sunflower seeds or suet from the feeders.  There has been a squirrel or two dozen also.  I don’t bother to shoo them away anymore; I just buy more feed…the money I ordinarily would be spending on walk-in dining or “boat drinks” now goes toward bird feed.

I caught a flash of brown sprinting across one of the flat areas behind the house.  Fox? Coyote?  I only caught a flash.  It would make sense if either.  Deer and turkeys returned to the flat behind the house that is cut by a rocky stream leading out of my own holler.  They were visible in the early spring through my kitchen window and I’ve seen tracks in my garden.  The deer and turkeys are absent right now, but they’ll be back as soon as their newborns are older, hopefully staying out of the garden.  A red-tail hawk is teaching her little one how to hunt, perched on a stick up in my yard waste pile.

As darkness descends the night shift takes over as hootie owls call to each other from the hillsides around us.  No lightnin’ bugs yet or whipporwills but soon….  Two mornings in a row I’ve found my suet feeder torn down and holes dug in the pathway leading to back gate   Make that four days in a row and it is Rocky Raccoon, too smart to get nabbed in my gum.  It appears he enjoyed the meal I left.  He was in no hurry to leave. 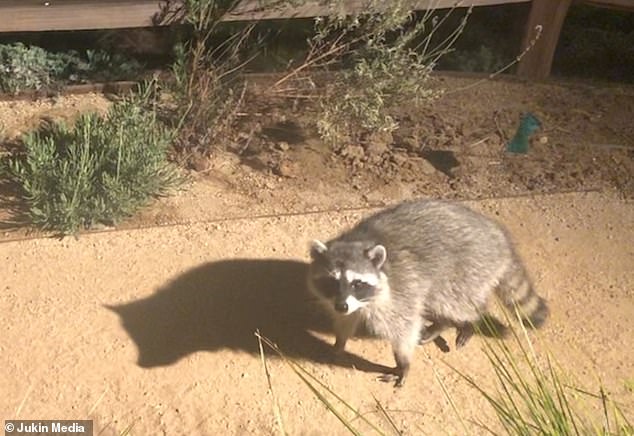 Not my picture but it could have been.  He didn’t seem the least bit scared.

With all the wildflowers, or weeds, obscuring my path, I’ve had to be vigilant.  Mr. No Shoulders has made an appearance in the protein-rich environment.  I’ve had to move the black rat snake away from nests and almost stepped on him once.  From years past I realize, he is persistent.  He is also hardheaded, there are plenty of field mice to feed on…maybe house mice too.  I guess baby birds are easier.

My bride and I have rediscovered a joy that had been missing…our morning walks…strolls…saunters.  I do my fitness walk and then she joins me for a slower, mental fitness walkabout ramble.  “Ooh look! A butterfly.”

Sometimes we hike our hilly property, but more likely we walk around the nearby lake.  The normally busy non-denominational “Look-up” Christian camp it sits in is deserted and wildlife and wildflowers are abundant…without the sounds associated with people…except from the distant highway.

An interesting tree on a steep hillside

We have taken to counting the turtles we see sunbathing on the docks and downed trees at the camp.  We do have “a little piece of heaven”  to get away from it all.  Yesterday there were twenty-six turtles and my bride took pictures of them all.  Next week I’m sure she will have them named.

Turtles sunning on a downed tree

All images were taken with my Android phone except for Rocky Raccoon, which explains the less than perfect presentation.

The prettiest flower of them all, my bride, Linda Porter-Miller

The feature image is of the honeysuckle choked bell in front of our home.  The picture was used for the cover of the book “Through the Front Gate”.  The book and others may be found at https://www.amazon.com/Don-Miller/e/B018IT38GM?fbclid=IwAR2SZmtwsbKyfX4PZGu3fFgPr9WRCtr-lE_LKs9rliC9ztLwWzG0TZu8AEo