A big for his age youth sporting a lint covered flattop staggered through his first day at the Springs Mills White Plant.  Staggered because in the first hour the man tasked with teaching the youth the art of ‘takin’ up quills’ attempted to crush the youth’s skull with one of the metal quill cans.  It was the youth’s fault, not the young man’s.  The youth was bloodied and staggered, and it was the beginning of a series of the first day on the job accidents, but that is a story for another time.  Clumsy much?

(In textile parlance, a quill is or was the wooden part of a bobbin the thread is wound on.   The bobbin would seat into a shuttle running perpendicularly to the warp threads. When the thread in the shuttle ended or broke, the bobbin was kicked out into a metal ‘can’ and replaced automatically from a magical gizmo called a battery.  I’m a bit short on the science of it all and you aren’t here for a lesson.  A battery with bobbins is shown below.  The wooden portion of the bobbin is the quill.)

I was the big for my age, crew-cut sporting youngster.  Tall for my age, and I got no taller, I was immature by anyone’s standards at any age.  Big for my age and dumb might have been a requisite for the job I was doing.  A spare hand, I did the jobs regularly employed folks were glad they didn’t have to do or filled in where needed.

I understood hard work having grown up on a farm and having been hired out as farm labor since I had turned eleven or twelve.  Farm labor is hard, but cotton mill labor is a horse of a different color as the old farmers might say.

I had worked at Springs for a week and was worn to the bone…battered and bruised, to the point of tears at various times. The narrow alleyways between the looms left my shoulders marked with scrapes and abrasions.  My body was a skin covered sack of pain.  It was a Saturday and all I could think of was the day off on Sunday…except it would be followed by a Monday when it all would begin again.

When I ran into a much older cousin in the water house I received a life lesson I didn’t know I needed. The water house in mill parlance is a combination bathroom, smoking area, and an escape from the noise and heat of the mill.  An oasis of relatively cool, quiet, and stinky aromas.

As I started to walk out, Charles, a much older cousin who had grown up just below my home, stopped me and put his arm across my sweaty, lint covered, bruised shoulders.

“I been watchin’ you boy,” tapping me on a sore arm with his pointer finger.  Charles was what was called a warp hand who worked out to the tie-in room.  It seemed to me warp hands had a good bit of time for watchin’…or playing practical jokes.  Charles, and his buddy Tommy, were masters at playing practical jokes, “Go down to the parts room and get me a loom stretcher, will you?”   It was the first of many practical jokes endured by the young group of spare hands.  I wasn’t singled out any more than anyone else.

The man in the part’s room cocked his head giving me the side-eye, “Loom stretcher, huh?  Charles sent you down, didn’t he?”  Got me. 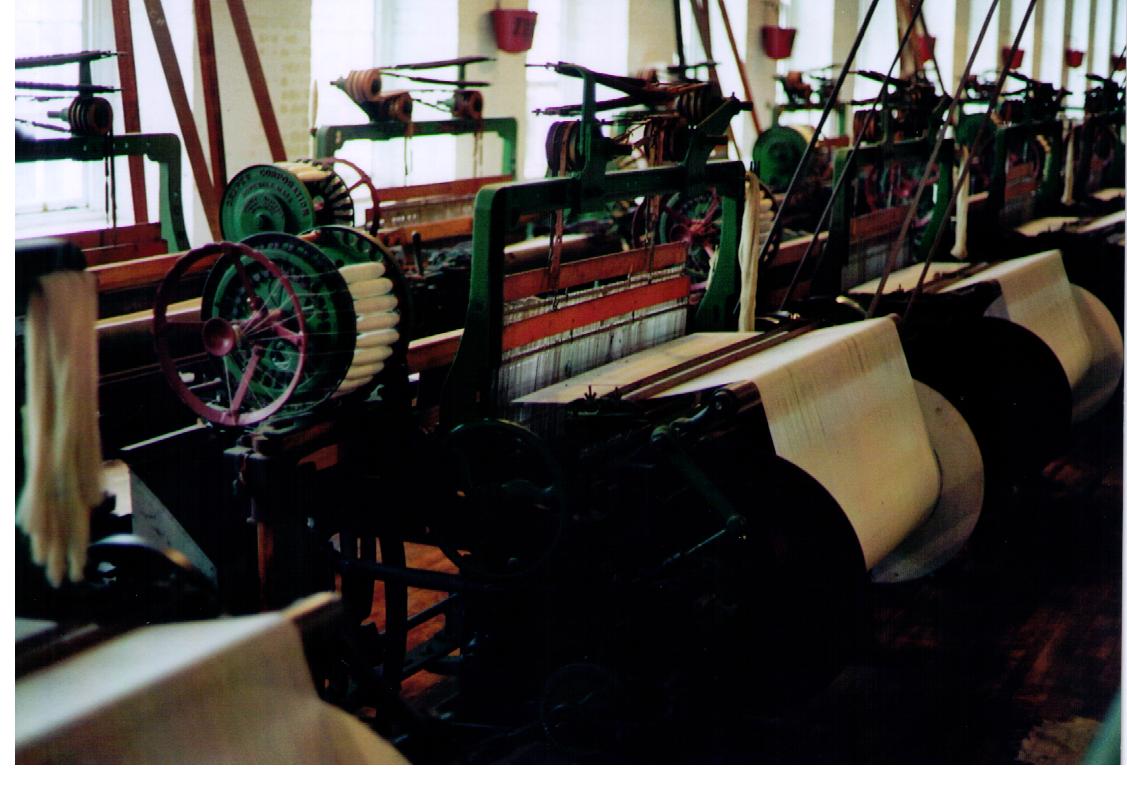 Back to Charles in the water house.

“You work hard but you got to learn to work smart.”  What Charles really meant was “learn to not work if you don’t have to.”

Beings Charles was an elder I decided I was supposed to listen intently…plus he had a scholarly look going…in a Howdy Doody kind of way.  I really felt I needed to learn how to work smarter.

“This ain’t no horse race and you ain’t learned the art of lookin’ busy when you ain’t.  You got to slowwwww things down.  Shifts are eight hours and you doin’ more than your buck sixty-five an hour.  Whatchu’ do after you finish your quill job?”

“I have to strip quills.”  Nothing provocative, I had to remove the leftover thread from the bobbins so the quills could be reused by the spinning room.

“An what do you do when you get through strippin’ quills?”

I pondered a moment wondering if this was a test, “I don’t know, I’ve never gotten through.”

He popped me on the shoulder as if I had had a major philosophical breakthrough.

“There you go.  You ain’t nevah gonna get through.  You could work a month of Sundays an’ you’ll nevah, evah get through.  The only time you’ll be through is when you die.”

So profound, I pondered too long on his words and Charles began again.

“Pretend you do get through.  Whatchu’ think gonna happen then?”

“They’ll find something else for me to do?”

Shooting me with his pointer finger and thumb, he exclaimed, “Bingo!  You nevah get through or if you do, ole Coley Spinks is gonna come along and give you something else to do.  You got to learn the art of lookin’ busy while doing nothin’, boy.”

Just then, as if to add an exclamation point, Coley Spinks, the second hand walked in.  Folding his Popeye sized forearms sporting the Marine Corp ‘globe and anchor’ tattoo across his ample chest, Coley gave us a head jerk which translated to, “You’ve spent too much time in here, get out and earn you wage.”

Charles scooted out the door with me behind, but Coley planted a flat palm against my chest, jolting me to a stop, “I don’t know what line of bull Charles was spouting but don’t listen to a damn thing he says.”  The age-old disagreement between management and the workers?

But I did listen to Charlie and endured his harmless practical jokes even if I never quite mastered the art of looking busy or falling for practical jokes.  I practiced a great deal and ran into many fellow workers who had truly turned it into an art form.

I am more of a “git er done, git er over with” kind of guy and I guess it served me well.  Mr. Spinks came to me on my last Saturday before the school year began and proposed, “We’d like you to work Saturdays during the school year if you are a mind to.”  Eight hours of hell for $13.20 before taxes.  “Yeah, okay.  Thanks.”

I’d work there for three more summers and Saturdays during the school year.  Later, I would work part-time in a cotton mill during my college days.  I never did get done. whether it was stripping quill or some other grunt job, and I ain’t dead yet.  Instead, I moved on to another vocation I never finished until retirement.

It was the mills themselves that died at the end of the last century…something I find saddening.  I would never want to return but I do appreciate the lessons I learned.

For more of Don Miller’s shenanigans, visit his author’s page at https://www.amazon.com/Don-Miller/e/B018IT38GM?fbclid=IwAR3EyTJntrwvN_Yq4p_rpDH3Ynurn688xmdNvzJhe_fH7NSBku3Zen-6yb0

The image is of belt driven looms take from one of the Lowell Mills.  https://www.newschoolers.com/news/read/The-List-Newschoolers-Member