I share quotes on my social media accounts.  Quotes I can’t create because I’m not bright enough or because someone said what I wanted to say first…and said it better.  I wish I could be profound but instead, I rely on the words of others to enlighten, humor or sometimes, provoke.

I call these quotes, Don’s Daily Dose because a former student suggested the moniker after reading a few day’s worths.  I’m thankful to her for suggesting the title and helping me to realize someone was actually reading them.

I share these quotes along with some form of artwork to emphasize the point…or just because I liked the snake wrapped around an arm attached to a hand holding an apple… the quote was about temptation after all.  The apple different shades of red, the snake a bright kaleidoscope of color…I find the painting tempting. 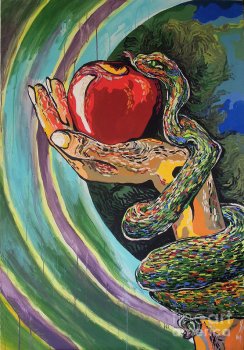 Usually, the art I choose is psychedelic, me embracing my inner hippie.  Vibrant and wild colors from the LSD trip I never took; peace signs, VW microbuses, Janis Joplin or Jimi Hendrix….  Sometimes I use the book covers from the authors I quote from.  I lean toward bold colors with purple and pink being favorites.

Then I quoted Ansel Adams and looked for art to go with my quote.  I was awed by his landscapes in black and white.  The quote was about the environment, something Adams photographed in black and white, his mode of artistic expression.  Mother Nature stark and sharply in focus…maybe auster.  Nature laid bare, no makeup to soften its features.

The picture I chose of a two-lane blacktop took me back to those thrilling days of yesteryear when “filmed in Technicolor” was the exception, not the norm.  Stark blacks and whites along with muted grays were the standards, life laid bare in living black and white. 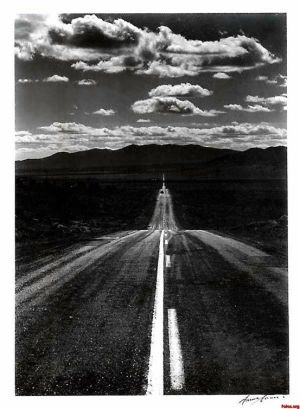 Movies, television, stills from Life magazine, most were in black and white in those days.  If I wanted color I thumbed through my grandmother’s National Geographic.  Wild animals and bare-breasted native girls filmed better in color.  In this modern-day, life is replicated exactly as it is on large screened TVs, tablets and I Phones. I still find black and white to be more poignant, more shocking, more potent.

Doretha Lange’s depression-era Migrant Mother does not reflect her pain in its colorized form.  Color is too soft.  Her turned down mouth with fingers stroking the side of her chin…pondering her lot in life it would seem. Her furrowed brow, two of her seven children hiding their faces from the camera.  There are no soft colors, just sharp black, and white pain.

Marlon Brando as Stanley Kowalski pleading for “Stella”, wearing a torn and dirty T-shirt, his hands clasped against his head…Same in Technicolor?  Only if his head explodes.  Stanley Kowalski was not a nice person, black and white suits him. 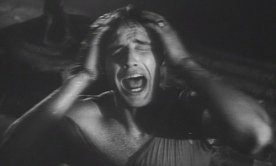 I watched Jack Ruby shoot Lee Harvey Oswald, Freedom Rider buses burn, and Walter Cronkite tell the nation a war was unwinnable after Tet, all and more on a black and white TV.  Those depressing moments were befitting of black and white.  No color necessary, no sugarcoating with pastels, no bold makeup.  Just stark black and white. 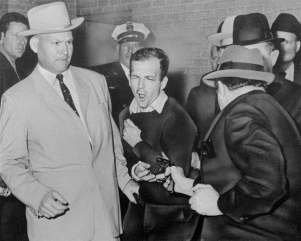 Most of my childhood memories are in black and white.  Friends and family posing, smiling on three, frozen as a Kodak catches their likenesses.  My parents so young in their courting pictures, people long dead, their faces faded in the old albums I liberated after my father’s death.

I sigh, exhaling heavily as I think about them. My winter depression may be sneaking up, edging closer.  It is a bit early yet but it always catches me by surprise like those “backshooters” in the black and white “oaters” I watched as a child.  Bad men willing to do their worst to the Lone Ranger and Tonto.  Willing but not able as they live on in the reruns of life.

It is still pre-dawn as I edit this and there are no colors other than black and gray of night.  Not even a hint of the sunrise to come.  The almost full moon nearing the western horizon doesn’t give enough light for colors to reflect.  I seem to do my best writing in the dark, surrounded by blacks and whites.   My best writing is relative and it is not the way I want to spend the rest of my life. 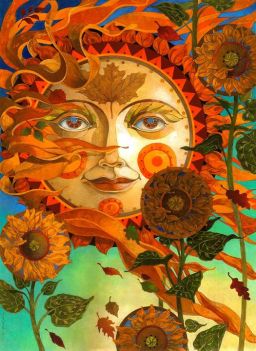 Don Miller’s author’s page may be found at https://www.amazon.com/Don-Miller/e/B018IT38GM

The featured image was lifted from https://pearlsofprofundity.wordpress.com/2014/07/12/life-in-black-and-white/

6 thoughts on “Life in Black and White”